Once a humble suburban strip on the edge of the city, Annerley now boasts a new generation of fans of its narrow, shady streets and character-filled homes. Formerly characterised by by ramshackle house on rambling streets, Annerley has come alive with an influx of families seeking out colonial, Queenslander and post-war homes, and professionals looking to live comfortably, close to the city.

Close to the city (but not the chaos), Annerley is relatively compact and filled with character. Op-shops still have a home here, but they’re now filled with vintage hunters, not bargain hunters. Restaurants and coffee shops have replaced greasy spoons and takeaways. Regular farmer’s markets are held in the nearby Boggo Road precinct, but many backyards have enough room for a small vegie patch of your own.

BUYING AND SELLING IN ANNERLEY 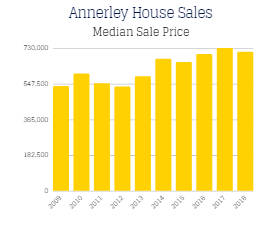 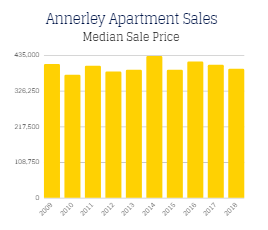 It is nice to see that house sales prices appear to have stabilised at $704,500. 146 houses were reported as sold in the 2017–18 financial year, which is a great sign that the suburb is in high demand. Of those sales 14 houses were sold for more than $1 million. Demand for houses in the area is high and growing, as the close proximity to the city and access to quality schools in the area is attractive to young families. Due to these reasons, we predict that the remainder of the year will see median house prices maintaining their current stabilised position.

Apartment prices also appear to be correcting, as is the case in surrounding suburbs, with the median sale price sitting at the $385,000 mark. It is a great relief that development of new projects in surrounding suburbs have not significantly impacted this suburb, and hopefully we can look forward to another quarter of apartment prices at this level. Buyers looking to live in the area are usually young professional couples, looking for one of Brisbane’s best locations with plenty of entertainment options, whilst investors can look forward to earning some great rental returns and future long term growth.

After a period of stagnation, the rental market has begun to show signs of improvement over the past 18 months. Median rental prices look to have stabilised at $460 for houses and $340 for units, which may reflect a slowdown in new developments both in the suburb, and also in surrounding areas. Changes in rental yields for both houses and units have mirrored each other over the past decade, however recently rental yields for units has improved, while houses have remained stable. This may be due to supply and demand factors, or a general cooling of the market.

The good news is that median rental prices remain historically strong for both houses and units. When taken with an overall strong demand and low vacancy rates, rental returns look strong for the future. Although tenants are spoiled for choice, it is pleasing that our leasing team is able to rent out our properties quite quickly as we work in closely with our property owners to determine the appropriate market rate to advertise at.

When Brisbane was first settled by the British, Annerley was used as dairy farming land. As settlement spread south of the River, Annerley was settled sooner than other nearby suburbs. The local hotel, named The Junction, was constructed in 1866, and eventually served as the hub around which a shopping centre formed (the pub is still open to this day). Annerley’s proximity to Woolloongabba, where a large tram depot was built in 1884, resulted in a railway station being built in Annerley in 1891. It was this construction that initiated the shift from farming land to residential construction.

Prior to being named Annerley, Annerley was known as Stephens Shire, named after Thomas Blackett Stephens. Stephens was a prominent figure in the area, and was later the Mayor of the Brisbane Municipal Council and other committees in the area. Renamed in 1925, Annerley was named after a township in Surrey in England by Digby Denham, the former Premier of Queensland. This renaming was around the same time of the housing expansion in the 1920s, when a number of Queenslander style homes were built in the area.

While the suburb has, over time, come to be known as a bit shabby, in around 2012 things started changing. It has been a steady process, but 2012 started the overhaul that resulted in Annerley becoming the fresh, vibrant suburb it is today. Urban regeneration is strong in the area, and the houses that have fallen into some disrepair are being bought and restored to their former glory. Also, while it might be an old suburb, the median age of people in the area was five years lower than the national average in 2016, which means that the area’s revitalisation is being driven by residents whose fingers are still firmly on the pulse of progress and change.

Only ten minutes away from Brisbane’s CBD, Annerley has a lot to offer. Annerley is very close to two major hospitals: The Princess Alexandra Hospital in Dutton Park, and Greenslopes Private Hospital in neighbouring Greenslopes. Annerley is bordered by Moorooka, Fairfield, Woolloongabba, Greenslopes and Tarragindi, which leaves you with plenty of options in terms of local amenities and nearby facilities. The area is well connected by public transport as well, so whether you’re heading to the CBD or further into the outer suburbs, Annerley is a great starting point.

While many suburbs in Brisbane are served by a single school, in this regard Annerley is something of an anomaly. Depending on where your house is in the area, you may be in the catchment zone for either Dutton Park State School, Buranda State School or Yeronga State School, but most likely Junction Park State School. Junction Park State School teaches Japanese as a LOTE and has a long history as a local primary school (it has an extensive Wikipedia page if you’re interested in the history of the school), dating back to 1891. Rest assured that if you have particular needs from a local primary school, Annerley offers enough variety that your child can be in the right school for them, provided you’re in the catchment area. If your children are a little older, Annerley is in the catchment for Yeronga State High School. They offer Chinese, German and Vietnamese as LOTEs and celebrate diversity. If your focus is on private schooling, Our Lady’s College and Mary Immaculate Catholic Primary school are both based in Annerley, the former a girls’ only school, and the latter a co-educational primary school. There are also boys’ schools and co-educational private educational facilities in the neighbouring suburbs. If your children aren’t in school yet, there are also three day-care centres just in Annerley alone.

If primary and secondary education aren’t factors for you, Annerley is home to the Australian College of Community Services, where you can enrol in courses that focus on mental health, community services, alcohol and other drugs, education, health and business. In nearby Woolloongabba there’s also King’s Institute of Management and Technology, as well as a number of other university campuses in St Lucia and in South Brisbane.

There’s a gym a little way up the road in Yeerongpilly, and many others along the river in South Brisbane, if working out is an important part of your day. There are also plenty of supermarkets in and around Annerley, so you won’t have to go too far after work for the essentials. While the traffic and road layout of Annerley may not make it Brisbane’s hotspot for walking and bike trails, there are plenty in neighbouring suburbs, including the beautiful Green Bridge in nearby Dutton Park, designed specifically with cyclists and pedestrians in mind. What Annerley does offer, however, is a fantastic range of parks, some dog-friendly, for you to exercise in. Within the bounds of Annerley there are the Clifton Hill Peace Park, the Log Across Norman Cree and Ekibin Park South. Just outside of Annerley there are also the Yeronga Community Gardens, the Yeronga Memorial Park, the Yeronga Dog Park, the Fairfield Dog Park, the Greenslopes Dog Park and the Thompson Estate Reserve. Talk about spoiled for choice! Also, if you’re a fan of the performing arts, the Griffith University’s Burke Street Studios are nearby and they offer a catalogue of music and theatre.

WHAT TO DO IN ANNERLEY

As Annerley has only recently come into its own as a vibrant, regenerated neighbourhood, there are a lot of exciting things going on. The influx of younger people to the area has resulted in an explosion of cafés, some of which are offering something a little different (Vietnamese coffee, anyone?). There’s even the Lucky Cat Café, which is exactly what it sounds like; bookings are required, but it sounds like it’s worth planning ahead for.

If shopping is your guilty pleasure, Annerley has some very unique offerings. It’s home to Southside Antiques Centre, one of Brisbane’s largest antiques stores. It’s also not too far from the excellent food and shopping options in West End.

If you’re always left with entertainment duty for friends and family who visit Brisbane, Annerley is also right next door to Dutton Park, where you can visit the Boggo Road Gaol or do a ghost tour in the South Brisbane Cemetery. Coupled with the old Queenslanders that have been given a facelift, it’s a lovely combination of old and new, with a great community feel. There are also all the art museums in South Brisbane and West End (and also the University of Queensland Art Museum in St Lucia), not to mention the Physics museum that’s also in St Lucia. Annerley is also well-connected to public transport, so if you fancy a day of shopping, you won’t have any trouble getting home. Of course, if you fancy a quiet day in nature, you’re spoilt for your choice of scenic parks.

While it might seem like Annerley doesn’t have as much to offer as some of the nearby suburbs, what it does offer is a suburban appeal while only being minutes away from the CBD. Not to mention that on the non-CBD side, it’s bordered by beautiful leafy suburbs with lots of parks. If you’re looking for proximity to facilities without the hustle and bustle of the CBD, Annerley is the best of both worlds. Not only this, but not everyone is clued in the redevelopment in the area, so the house prices are much cheaper than in neighbouring suburbs. Annerley might seem like a sleepy suburb, but it’s poised to really come into its own.