A ring-side seat to innermost-Brisbane and the CBD, East Brisbane is a great way to get close to the action without being stuck in the middle of it. Very well-connected with public transport (both ferries and buses), it’s close to both the Woolloongabba Bus Station and the Coorparoo Railway Station. East Brisbane delivers a charming blend of heritage-listed locations (including Eskgrove, one of the city’s oldest surviving residences) with more typical Brisbane city views just over the River and north in nearby Kangaroo Point. Just to the side of one of Brisbane’s main thoroughfares, East Brisbane receives all the benefits of connectedness and a central location without the overbearing traffic congestion and noise. 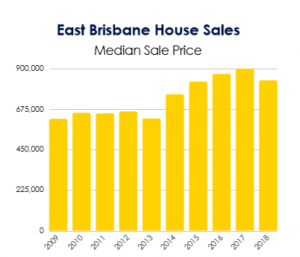 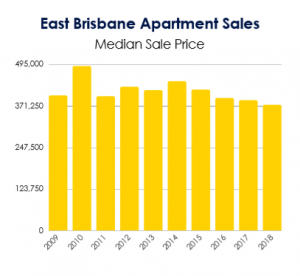 With the first half of the year now past, it is nice to see that house sale prices appear to be tracking positively, with the median price at $833,500. East Brisbane is a high demand market as each property receives more than double the state average of visits.

Demand for houses in the area is huge as the relaxed lifestyle, close proximity to the City and access to quality schools in the area is attractive to young families. Due to these reasons, we predict that the remainder of the year will see median house prices continue to push towards $900,000.

Apartment prices also appear to be stabilising, with the median sale price moving towards $370,000. It is a great relief that development of new projects has well and truly slowed down and hopefully we can look forward to another quarter of apartment prices at this level. Supply growth in surrounding suburbs has had a flow-on effect over the past 3 years, causing median prices to fall. We expect this to slow as more developments are put on hold, and supply levels are reduced to meet the level of demand.

We can finally take a breath of relief with the completion of several major apartment complexes in suburbs surrounding East Brisbane. The developments will add long-term value to Brisbane with their world-class facilities and high-end finishes, but have had a slowing effect on the rental market recently. In the short term, too many have been built and there is an oversupply in the rental market. It is reassuring to know that developers are starting to realise this and there have been a number of projects not proceeding, meaning that this long period of growth has now come to an end as of 2018.

The good news is that median rental prices have now stabilised, with the median weekly rent for houses sitting at $535 and for units at $3500. Although tenants are spoiled for choice in the unit market, it is pleasing that our leasing team is about to rent out properties quite quickly as we work in closely with our property owners to determine the appropriate market rate to advertise at. There are fewer than twenty properties currently listed for rent in East Brisbane, and demand remains high, which means there could be an opportunity for investors to increase their rental yield in the short-term future.

An older suburb of Brisbane, East Brisbane was largely established as a residential neighbourhood in the 1880s Brisbane property boom. Development began in the 1870s and slowly continued for the next few decades, with the local post office opening in 1886 and the Shafston, the first hotel, opening in 1890. A primary school followed in 1899. Further tram line extensions throughout the area and the development of Woolloongabba as a transport hub encouraged more people to move there, even though some of the lower lying land was an active flood plain. This creek was straightened out in the 1920s, leading to the designation of Tristram Park (where the run-off now flows) and reducing the creek’s flood risks.

Residential growth on the southern side of the River was slow to start with, with residentially developments typically following the river around to the south towards Highgate Hill and Dutton Park. While there are many heritage-listed buildings in East Brisbane (including one of the oldest surviving residences in Brisbane), the area has had a very quiet history of steady development, leaving a lot of the drama and sweeping changes to its neighbours instead.

East Brisbane is well-positioned to let you take advantage of what Brisbane has to offer without being subjected to the congested traffic that other parts of the city suffer from. The creek that forms the eastern border is surrounded by parkland, providing a beautiful parkland respite from inner-city living. To the east it is bordered by Norman Park and Coorparoo, to the south, Woolloongabba and Buranda, and to the north-west, Kangaroo Point.

All of East Brisbane and nearby Kangaroo Point is in the school zone for East Brisbane State School, a primary school with a strong focus on critical thinking and developing strong IT skills in their student body. Built in 1898, East Brisbane State School was largely redeveloped in 1999 to modernise the campus, and they now offer Japanese as a LOTE. If your children are secondary school–aged, the area is zoned for Coorparoo Secondary College, which offers a range of extracurricular activities in sports and the performing arts. The school’s offered LOTE is Chinese, and with a relatively small campus size of 400 students enrolled across years 7 through 12, it’s a rare opportunity for small class sizes in inner-city education. If your preference is for private education, Somerville House is a prep to 12 all-girl’s school in nearby Highgate Hill, and ‘Churchie’, the Anglican Church Grammar School in East Brisbane, is a prep though 12 all-boy’s school. Kangaroo Point is also home to St Joseph’s Primary School, a prep to 6 private school. If your kids are younger, there are also seven day-care centres in and around East Brisbane, and several kindergartens.

If pre-tertiary education isn’t quite your idea of a good time, neighbouring Woolloongabba hosts the King’s Institute of Management and Technology, and you’re not too far away from the many university campuses not only in South Brisbane on the same side of the River, but also the many campuses across the River in Brisbane City, including James Cook University, CQUniversity Brisbane and Federation University Australia.

There are good local medical facilities in East Brisbane, and it’s close to not only St Vincent’s Private Hospital Brisbane in upper Kangaroo Point but also the Queensland Children’s Hospital and the Mater Private Hospital, both of which are in South Brisbane.

If you like to keep active, East Brisbane has nearly ten gyms and physical fitness facilities for you to try out, including the Barry McCart Aquatic Centre and Infinity Martial Arts.

Next-door Woolloongabba also has nearly as many facilities again, so there should be something for everyone. There are also a few bike trails that travel the eastern and southern borders of East Brisbane, following Norman Creek up towards the River and also along the River itself. Many of the parks in the area would also be great locations for rides or walks, if you prefer. If you don’t mind a longer ride, Woolloongabba is a huge hub for many walking and riding tracks as well.

Speaking of parks and walks, if you have a beloved dog or two in your life, East Brisbane has a huge number of options for dog-friendly parks: Mowbray Park, East Brisbane Dog Park, Real Park, The Common Park and Heath Park, not to mention the many parks in Woolloongabba as well. There should be something for even the most discerning of dogs.

WHAT TO DO IN EAST BRISBANE

While it’s not known for being a hub of activity, there’s still plenty to do in East Brisbane and its surrounds. It would be remiss of us if we didn’t start with one of the biggest drawcards nearby: the Gabba. Whether you prefer cricket or AFL, the Gabba is a great place to put on all your sports kit on and get loud!

If you like local history and you don’t mind the slightly spooky, East Brisbane is also relatively close to Dutton Park, where you can not only tour through the old Boggo Road Goal, but you can also take a trip up to the South Brisbane cemetery to see some of the oldest graves and monuments in Brisbane.

The area also has some truly charming boutique stores. If you like to sew, Voodoo Rabbit Fabric might just become your favourite new fabric store. If books are your guilty pleasure, the Clarence Corner bookshop offers a mixture of new and old books, plus you can sit down for a coffee in their café. Missing the days when that other place served coffee while you browsed books? If you’re in East Brisbane, those days have returned, and now you’ll be shopping local. There are also a few clusters of commerce tucked away in East Brisbane, so it’s well worth hitting the footpath to see what treasures you can find while you wander.

If you have a lot of visitors who aren’t regulars to the area, there are lots of fun destinations you can take them to make sure they leave Brisbane wanting to come back! For the young (and young at heart), there’s Lasertag nearby in Woolloongabba, or you could look into abseiling down the cliffs at Kangaroo Point. If you prefer your fun with less danger and more sitting down, the Brisbane German Club in Woolloongabba hosts regular trivia nights as well as annual Oktoberfest celebrations. You could also take guests on the Story Bridge Adventure Climb, one of only three bridge climbs in the world. And, of course, in East Brisbane you’re only minutes away from the CBD, the heart of shopping in the city where you can shop and dine until you drop.

While there might not be any major drawcards in East Brisbane itself, there’s certainly more than enough there to keep you happy. Its true appeal rests in the fact that, given that it’s just off the beaten path, you’ll have a quieter home life without sacrificing proximity to the action.