South-east of Annerley, Fairfield is a small but lush suburb only 4.4km from the Brisbane CBD. A fantastic blend of form and function, Fairfield has convenient local shopping and is close enough to the more specialty shops that make Brisbane unique. Fairfield has 12 parks that cover around 15% of its 1.3 square kilometre size. It has a population of just under 3000 people, up from around 2500 people in 2011. This shows a population growth of around 18% within the last few years.

Most of the people living in Fairfield are likely to be working in professional jobs, and are mostly childless couples, but there are also plenty of families with young children. Nearly 40% of the population falls between the ages of 20 and 34 years old, with the vast majority of those falling between 20 and 30 years old. In 2011, owner-occupied homes accounted for 51.6% of the total homes in the area, which according to Australian census data had grown slightly to 52.9% by 2016. House prices in the area have grown around 8.5% over the last three years. 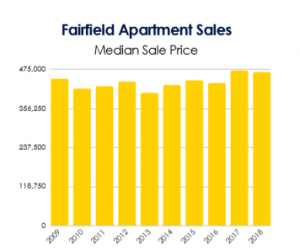 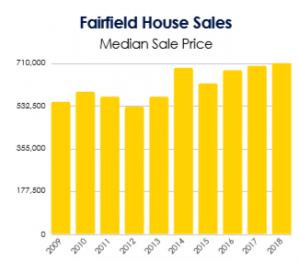 With the first half of the year now past, median house prices appear to be continuing to increase, pushing to $709,400. There were 60 houses reported as sold between March 2017 and March 2018, which is a sign that the suburb is in high demand. Of those sales 12 houses were sold for more than $1 Million. Demand for houses in the area is high and growing, as the close proximity to the city and the Brisbane River are highly desirable, especially given the extensive parkland area in the suburb. Due to these reasons, we predict that the remainder of the year will see median house prices maintaining their current upward trend.

Apartment prices also appear to be stabilising, as is the case in surrounding suburbs, with the median sale price sitting at the $465,00 mark. It is a great relief that development of new projects in surrounding suburbs have not significantly impacted this suburb, and hopefully we can look forward to another quarter of apartment prices at this level. Buyers looking to live in the area are usually young professional couples, looking for one of Brisbane's most picturesque locations with plenty of entertainment options, whilst investors can look forward to earning some great rental returns and future long term growth.

We can finally take a breath of relief with the completion of several major apartment complexes in suburbs near Fairfield. While these developments are high quality and will ultimately add value to Brisbane, they have had a slowing effect on the rental market recently. In the short term, too many have been built and there is an oversupply in the rental market. It is reassuring to know that developers are starting to realise this and there have been a number of projects not proceeding, meaning that this long period of growth has now come to an end as of 2018.

After a period of rapid increases, the rental market has begun to show signs of stabilising over the past 12 months. Median rental prices look to have levelled at $475 for houses, and $360 for units, which may reflect a more accurate market assessment for the suburb. Changes in rental yields for both houses and units have mirrored each other over the past decade, however recently rental yields for units has improved, while houses have remained stable. This may be due to supply and demand factors, or a general cooling of the market.

The good news is that median rental prices have moved towards a more stable range, which is reflected in the decreasing vacancy rates and low current available stock. Although prospective tenants have a small supply pool, it is pleasing that our leasing team is able to rent out our properties quite quickly as we work in closely with our property owners to determine the appropriate market rate to advertise at.

The development of Fairfield as a residential area followed the general trend of development in Brisbane as the city continued to grow along the banks of the Brisbane River. It was most likely filled as part of the general expansion of Brisbane along the southern banks, leading out from Annerley (where the railway station was built in 1891) and the subdivision of Yeronga from 1884, where new lots of land were sold near the railway station there. As it’s only a small space surrounded by areas that were populated before it, it might not seem like much has happened in Fairfield, but sometimes a quiet area that’s just getting on with it is exactly what you want.

Tucked out of the way, but not too far, Fairfield is a surprisingly accessible suburb within easy driving distance to the Brisbane CBD. When Fairfield was first opened for sale as housing developments way back in 1914, the area was described as, “A nicely elevated ridge, adjoining the overbridge. There is a splendid train service of 11 minutes to town, and the tram is within easy distance”. Fortunately the same is still true today, with public transport access connections through Yeronga Station, Fairfield Station and the Dutton Park Station. The suburb is bordered to the north, west and partly the south with parkland, although some of the suburb border is formed by the river itself. It’s also very close to the Princess Alexandra Hospital, not to mention that Fairfield is known for its close-knit local community, so you’ll be looked after in more way than one.

If educating children isn’t a concern for you, there are plenty of tertiary education options for further study as an adult. Without crossing the River you can access the South Bank campus of TAFE Queensland, as well as Griffith University’s South Bank campus and Griffith Uni Film School. On the other side of the water (connected by Dutton Park’s Green Bridge, which is great if you’re a cyclist or pedestrian), in St Lucia, there are multiple University of Queensland campuses, including the Riverside campus, the UQ Faculty of Business, Economics and Law and the UQ Business School. Also, Annerley has the Australian College of Community Services, which offers courses in mental health, community services, alcohol and other drugs, education, health and business.

If you’re a fitness fanatic, Fairfield has its own Snap Fitness, but there are plenty of gyms and fitness facilities in Dutton Park, Annerley and Yeronga, including yoga schools. If you prefer to walk or cycle, you’ll be well pleased with Dutton Park’s many bike trails and walking paths (particularly over Green Bridge), as well as the many parks that are not only in Fairfield but also Dutton Park and Annerley.

If your best friend has four legs, chances are they’ll love Fairfield Dog Park, one of the few off-leash dog parks in the area; the next closest off-leash parks are in Dutton Park and Yeronga, which are close enough to be convenient if Fairfield Dog Park doesn’t tickle your pooch’s fancy.

WHAT TO DO IN FAIRFIELD

As a relatively small suburb, a lot of Fairfield is focused on providing the essentials, but that doesn’t mean that there’s nothing to do! If you like to keep it local, there’s Fairfield skate park and the Fairfield Library right in your backyard for some free, family-friendly entertainment. With so many parks, you could go to a different one every weekend and keep yourself busy for months finding all the nooks and crannies and seeing what local wildlife lives in each one.

Fairfield also has its own fair share of cafés catering to a range of clientele, so whether you’re looking for something fun, different or family friendly, you should be able to find something that suits. If there’s nothing there that grabs your interest, you’re only a short way from West End and all of its wonderful, diverse offerings. The same goes for shopping: Fairfield has its own shopping centre and supermarkets (and if you don’t like those, there are plenty of others in St Lucia and Yeronga!), but if you prefer boutique shopping, or something a little different, it’s only a short drive to West End, Highgate Hill or Annerley to get your fix, whether antiques, vintage clothing or other knickknacks.

If it falls to you to entertain people who don’t spend much time in Brisbane, Fairfield is in the middle of some very different, tourist-friendly opportunities. Dutton Park offers the Boggo Road Gaol Ghost Tour, where you can tour the old jail. You’re also not too far away from The Gabba in Woolloongabba, so you could always stop in for a match if it’s cricket or AFL season. If you prefer the arts, there’s the Physics Museum and University of Queensland Art Museum in St Lucia over the River, or the art museums in South Brisbane and West End on the same side.

Fairfield is a great suburb to sit back and watch the world go by, knowing that you have everything you need right near your home, and that anything else isn’t that far away. Full of beautiful parks and close to the water, Fairfield is a small suburb with a strong local community and a lot to offer.