Yeronga is a residential suburb located 7 kilometres south of the Brisbane CBD, on the Brisbane River. It is approximately 3.5 square kilometres and has 9 parks covering nearly 18% of its total area. In 2011, Yeronga had a population of 5540 people. By 2016 it had a population of around 6500 people, which shows an increase of 18% during that time. The typical age for Yeronga residents is 20–9 years old, who are more often than not childless couples with a median income of approximately $950 a week. The median price for houses in the area is $833,000 and the median apartment value is around $447,000. The median weekly rent is around $500 for houses and $370 for units. The majority of homes are owner-occupied (56%), and around 58% of people living in the area are single people, with the remaining 42% is made up of families.

Yeronga (not to be confused with neighbouring Yeerongpilly) used to be a well-kept secret. Up until recently it was mainly populated by families who had been long-term residents, but with the population and property boom throughout Brisbane, the younger crowd have started to move in. Don’t let that sound like a bad thing though, this means that a suburb that already had fantastic, family-friendly infrastructure now has many of the modern conveniences and facilities that we’ve come to expect, like boutique shopping and cafés. 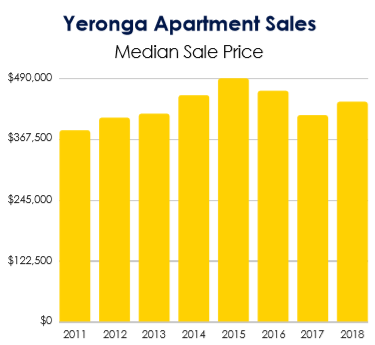 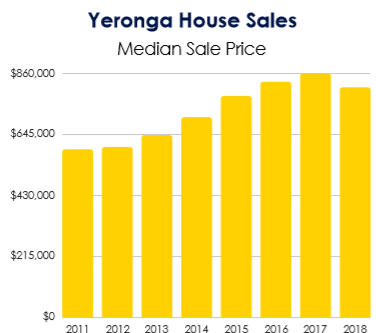 Since the middle of 2018, house prices in Yeronga have begun to stabilise after a period of solid growth. Seventy-seven houses were sold from July 2017 - July 2018, and of those 21 sold for more than $1 Million. The highest sale price achieved during this period was $7.8 million for a 6-bedroom estate at 19 Ormadale Road. Demand for houses in the area is huge as the relaxed lifestyle, close proximity to the city and river and access to quality schools in the area is attractive to young families. Due to these reasons, we predict that the remainder of the year will see median house prices continue to move upwards.

Apartment prices also appear to have stabilised with the median sale price sitting just below the $450,000 mark. Yeronga has recently been affected by large supply increases in surrounding suburbs, and the previous year's price movements reflect this. Buyers hoping to live in the area are looking to move into a beautiful suburb with great entertainment and dining options whilst investors can look forward to earning some great rental returns and future long-term growth.

There were fears that large scale developments in surrounding suburbs coupled with smaller developments within Yeronga would negatively affect the rental market in 2018. However, this has yet to materialise, and the rental market remains strong despite the additional stock. It is reassuring to know that developers are starting to come to terms with oversupply issues, and that this long period of growth is now coming to an end as of 2018. Despite supply increases, vacancy rates remain low and rents remain stable.

The good news is that median rental prices have now stabilised with the median weekly rent for houses sitting at $463 and for units at $380. Although tenants are spoiled for choice, it is pleasing that our leasing team is able to rent out our properties quite quickly as we work in closely with our property owners to determine the appropriate market rate to advertise at. We consistently outperform industry averages and other local agencies as we maintain a large share of leased listings.

Metrocity is a boutique sales and property management real estate company specialising in Brisbane Real Estate. Above all else, we value our clients and work hard to ensure a smooth real estate experience for each and every person we deal with. Metrocity has maintained its dominant market share for the last 17 years through striving to deal professionally and with integrity.

We can't wait to show you what we can do for you.

As a suburb, Yeronga has a long history. It features in the story of timber getters Thomas Pamphlett, Richard Parsons and John Finnigan’s journey around the Moreton Bay area back in 1824. The three convicts were caught in a cyclone and blown off course. Believing they were actually south of Sydney, they attempted to walk north along the coastline towards Sydney, while they were actually following the south bank of the Brisbane River, where they passed through Yeronga. The nearby Pamphlett Bridge is named after the one member of the party who could swim. They were ultimately rescued by John Oxley, a major figure in the establishment of Brisbane as we know it today.

The first land was offered for sale in Yeronga in 1854, before Queensland was even considered its own state (it was considered part of NSW until 1859). The initial land release was 154 acres, with another 100 acres being sold in 1861. Most of the purchased land was initially used for agriculture and dairy farming; the most common crops grown were potatoes, cotton, sugar, arrowroot and maize. Over time the farming land gave way to residential settlement, which began at Fairfield Road and slowly spread outwards. In 1884, parcels of land in ‘Yeronga Estate’ were offered, with further subdivisions occurring through until 1927. The last remaining farm in Yeronga was subdivided in the mid-1950s.

There were some light industrial developments in Yeronga in the 1950s, including a Sunbeam factory, as well as a paint factory, a timber yard and a warehouse. All of these businesses have now closed, and it is likely that the land they are currently on will be rezoned as residential in the long-term.

The lagoons in the area, which had been used as rubbish dumping grounds during the development of the area, were eventually topped with clay and made into parks. This is why Yeronga has such a large amount of parkland for its size, and also explains the open space near the river today; there is a wide strip of parkland connecting Fairfield Road with the river at one point. Of course, while it’s beautiful, living by the river does come with some disadvantages. There are a number of raised houses in Yeronga, which are the result of the 2011 Brisbane floods, which hit some of the lower part of the suburb.

Well connected by multiple bus routes and two train stations, Yeronga is a lush suburb that sits across the river from the Indooroopilly golf course. Yeronga is bordered to the north by Fairfield, the east by Annerley and to the south by Yeerongpilly; the west and some of the northern border are formed by the Brisbane River. It’s also close to the Princess Alexandra Hospital and the Greenslopes Private Hospital.

Yeronga is zoned for Yeronga State School, which has just over 600 students enrolled in grades prep through six. Established in 1871, it now offers German as a LOTE and prides itself on its strong school community, offering a range of extra-curricular programs and opportunities for its students. If you prefer private, St Sebastian’s Catholic Primary School is also based in Yeronga; this is a coeducational primary school that has students from prep through to year six. With under 200 students enrolled, it is a much smaller school than Yeronga State School.

If your children are past primary school, the entire suburb is zoned for Yeronga State High School, which offers German, Vietnamese and Chinese as LOTEs, and has a strong emphasis on diversity. There are also two girls only high schools in neighbouring Annerley: Our Lady’s College and Mary Immaculate Catholic Primary School.

If children’s schooling is of minimal interest to you, you might be pleased to know that there are a number of tertiary institutions within a short distance of Yeronga. There is the Australian College of Community Services in Annerley, where you can enrol in courses on mental health, alcohol and other drugs, community services, health, business and education. Across the river in St Lucia there are several University of Queensland campuses, including the UQ Business School, the Riverside Campus, and the Faculty of Business, Economics and Law.

If you prefer to focus on your fitness, you’ll be pleased with Yeronga. There are a number of bike trails, one of which follows the river and extends north well past Dutton Park, as well as a few shorter trails that are contained entirely within the suburb. The extensive parkland also provides a variety of locations for walks or more leisurely bike rides. There’s also the Brisbane City Council Pool in Yeronga Memorial Park to the east of the suburb, so if you prefer water to pedalling, Yeronga has what you need.

If your four-legged friend features heavily in your planning, there are several dog parks in Yeronga, including the Yeronga Off Leash Dog Park and the Yeronga Dog Park.

Yeronga is also fortunate in that it will soon be positively affected by some developments happening locally. The old TAFE site has been declared a priority development area and is pegged to be rejuvenated into an integrated community space. Not only that, but the Yeerongpilly Green development will not only create thousands of local jobs during its construction but will also revitalise and reinvigorate shopping in the neighbouring suburbs.

WHAT TO DO IN YERONGA

Yeronga has plenty of its own local shopping (remember that it has functioned as a relatively closed suburb for a long time), but fortunately it’s also situated conveniently between Fairfield and Yeerongpilly, which add some variety to the mix. If you prefer your shopping boutique rather than big box, Annerley might be where you spend some of your weekends, picking over the local antiques stores.

While locals have celebrated the relatively recent arrival of local coffee shops, if the local fare isn’t to your liking then nearby Fairfield has a small selection of quirky cafés that might take your fancy. There are cafés there catering to the child-free and the family with children, so no matter your preference, chances are something will take your fancy.

If you regularly entertain guests, Dutton Park is only a stone’s throw away, and is home to the Boggo Road Gaol, which hosts regular ghost tours. It’s also an interesting destination during the daytime, if you’re not so interested in the spook factor! Alternatively, there’s the Physics Museum and the University of Queensland Art Museum across the river in St Lucia. If you or your friends don’t mind the occasional round of golf, you’re also just across the river from the Indooroopilly Gold Club and St Lucia Golf Links.

Realistically, most people are moving to Yeronga for the great local atmosphere and beautiful surrounds, but it’s always nice to know that you don’t have to be bored in paradise. Yeronga is a gorgeous riverside suburb with a lot to offer, and a lot of new opportunities rapidly approaching.